Today we’ve got a guest post from Megan who writes about Living Tiny, Dreaming Big over at mcstarbuck.com.  She’s sharing with us her wonderful insights on the correlation of debt and clutter and what she’s learned about getting rid of both of them.

What’s the best thing about paying off $25k in student loans? It shows you what you’re capable of.

After getting out of debt, I realized that it hadn’t been the only thing I’d accumulated during college. So I took what I’d learned in getting rid of debt and applied it to getting rid of clutter. 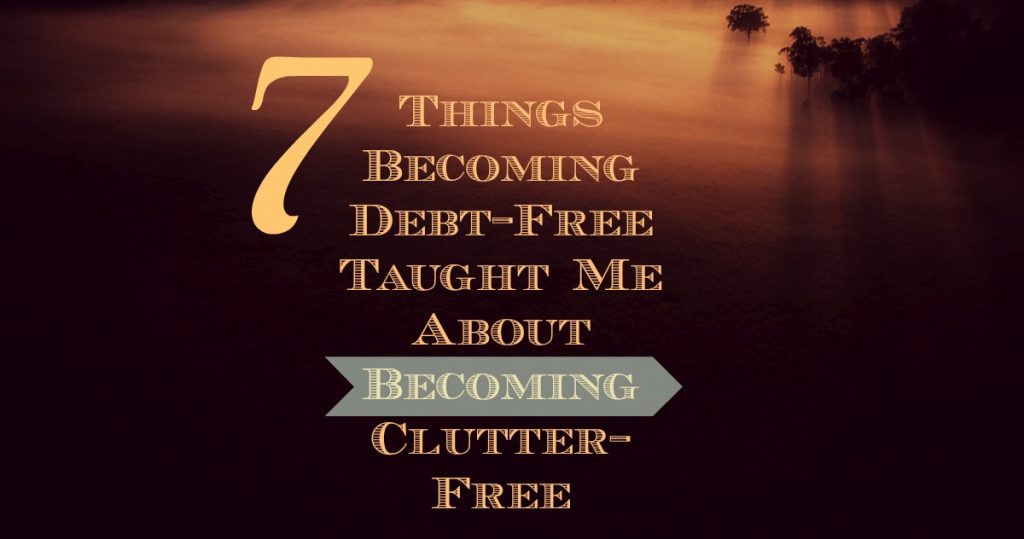 Debt: To keep from getting discouraged, I put large chunks of my paycheck toward the loans so I could watch the numbers drop drastically. Of five loans, I paid off the smallest one with the highest interest rate first. I kept thinking of all the money I was saving by not paying that extra interest.

Clutter: I chose the smallest/easiest room to declutter first (and one that wouldn’t immediately accumulate more clutter): my closet. It wasn’t as fast as I expected because of all the paper clutter, which takes a lot of time to make a dent in a small space. Still, it was faster than a large room with lots of paper clutter. I also filled a bin the size of a toy box with items to donate. I think it only took me a day that first time because that was my focus. I needed a quick win.

Debt: The student loan repayment plan suggested ten years. I didn’t want to be thirty and still in debt, so I set my goal at five years. I worked backwards from there. If I wanted to pay it off in half the time, I should pay twice the money.Sometimes I paid more, sometimes less. Having the plan helped me measure if I was where I wanted to be or not and make adjustments accordingly. I ended up paying it off in three years.

Clutter: I spend about thirty minutes a day on it. I also have a bin for items to be donated.

3. Be realistic about how long it will take.

Debt: I would have loved to pay off my loans in a year or less, but I knew my lifestyle wouldn’t allow that. I didn’t know how to make that much money right out of college. I also didn’t want to give up my annual trip out of the country. I knew I could pay them off eventually, though, if I kept at it.

Clutter: Once I began being diligent about decluttering, I recognized that it could be completed in a year. I had naively expected it to only take three days. A whole year seems intimidating, but three days is actually more terrifying! Trying to do everything in a few days made me feel rushed, overwhelmed, discouraged, hopeless, and unprepared. Instead I think of how much I can accomplish in a year and yet how quickly it goes by. I’ll have time to develop a system to keep me from letting clutter (which took so much work and time to eliminate) take over again.

Debt: I began making payments before they were due. I was never late on a payment (although I came close once), and I regularly made extra payments. The amount of the payments often varied depending on my job, but the frequency of the payments was solid. While I only had to make payments monthly, financial decisions occurred regularly. I made daily decisions about how I’d spend my money: on books? workshops? a road trip? Would I work extra hours for those things?

Clutter: As soon as I wrote my seven step plan for a clutter-free life, I started it. Emptying that bin to fill with stuff for donations seemed like a small step, but a year of small steps do more than a week of big steps. (Click to Tweet) I wish I did more, but at least I keep doing something. I would’ve gotten discouraged if I’d tried to stay up all night making a dent in the clutter. Instead, I try to do something everyday even if I can’t do my normal thirty minutes. Maybe I’m out of town and can work on decluttering my email, reading books or articles on simplicity, or making a list of what to do when I get home.

Debt: I took weeks and even months off work at a time while paying off loans. I took that into account because it was important to me. I also drove an old vehicle that would randomly require financial attention. I didn’t let that bog me down. I remembered that for the most part I was paying off my loans quickly.

Clutter: I try decluttering early in the day so that if someone interrupts me, I still have time before bed. Some days I wish I had managed my time better. Before I know it, I realize I’m exhausted and still haven’t decluttered. Sometimes I’ll still make myself do it, but other times I allow myself to feel that disappointment so that I won’t let it happen again. I remember that tomorrow is a fresh start. Maybe I can do double, or I’ll just take longer to reach my goal. But I will reach my goal rather than give up because of a bad day.

Debt: I imagined what paying off my loans in five years would be like. It would mean more independence and less stress. I could travel more, quit my full-time job, spend more time with family, start a business, buy land, build a tiny house, start a blog. I wasn’t just paying off student loans because it seemed like a good idea. I had important things motivating me.

Clutter: I never wanted to be clutter-free until I realized all the benefits. I could be a better host and find things when I needed them. Even more surprising was that it gave me more energy as I let go of items I felt obligated to keep (gifts, things “everyone should have”). I didn’t know how much mental space my physical clutter was taking up. Once I found out, I never again considered giving up on a clutter-free lifestyle.

7. Remember it’s hard but worth it (and even fun)!

Debt: Going without products other people find so useful can be annoying. For me, it was a laptop. I wanted to be debt-free more than I wanted my own computer, but it was still frustrating sometimes.

It was fun telling people about my accomplishments, though. Not just at the end but each time I paid off a loan. I love using my story to inspire others and help them reach their own goals.

Clutter: Decluttering takes a lot of mental work. It’s a process of decisions. Should this be given to a friend? donated? sold? If so, where? It’s time-consuming and draining.

It’s exciting, though, to find something you can use immediately. I’ve also found several laughter-inducing items because they’re so outdated or ridiculous for me to have kept. Just like with finances, I’m able to support others trying to eliminate clutter. I’ve had fun meeting new people because of this goal to improve my life.

Paying off debt helped me develop habits that will benefit me for the rest of my life. I hope this post does the same for you.

What do you struggle with most about getting rid of debt or clutter?

M.C. Starbuck lives in GA and writes about living tiny and dreaming big. If you want to receive the 7 Baby Steps for a Clutter-Free Life, sign up for her newsletter at mcstarbuck.com.