I’m going to give you a heads up before you read this post.  It’s raw and I’m going to use some language that I normally wouldn’t on here.  And well, parts of this may make some of you uncomfortable.  But this is something that MUST be said.

I woke up this morning to a flood of less-than-appropriate Facebook messages.  Not from a stranger, but from someone I know.  Someone I grew up with.  Someone I thought better of.  And the worst part?  This wasn’t the first time.  I handled it the same way I’ve handled it before.  Roll my eyes, make a mental note that he must have been drinking last night, ignore it and move on with my life. 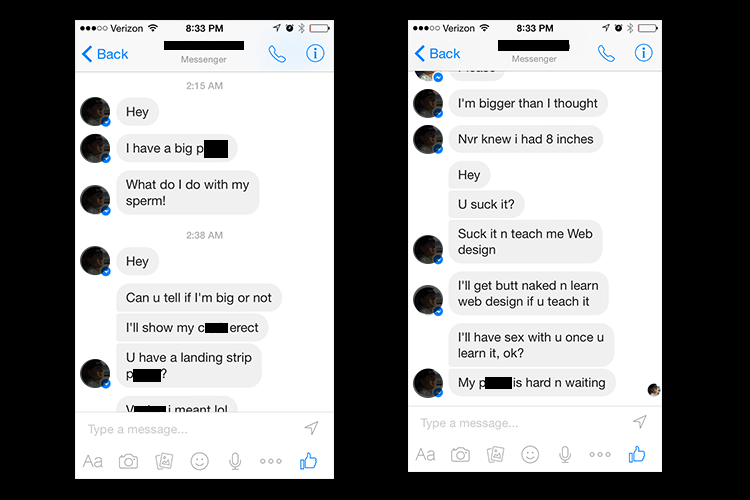 But this morning was different.  I had time to think about it.  Why was I tolerating this behavior?  Obviously ignoring him wasn’t making it go away.  There were more than a dozen messages last night over about an hour.  (And now we all know why I use the Do Not Disturb mode at night.)  And what’s more, why was I making EXCUSES to myself for his behavior?  Making excuses for someone treating me like crap?

“He must have been drunk.”

“That’s not the kind of guy I knew in school.”

Does anyone else see how ridiculous this sounds?!  And I know I’m not the only one that’s been through this.  I talked to other female friends today…and while they were ALL properly appalled by this, many weren’t entirely sure they would have done anything other than what I did in the past.  We wouldn’t let someone that harassed us in person get away with it unscathed, so why would we make excuses for something done via messages?  I know if it had been a stranger, I would have blocked them in two seconds flat, but I let this slide because it was someone I knew.

We need to stop making excuses.

There is no more “boys will be boys.”  There’s no more blaming it on the alcohol.  Grown men should act like grown men and show some damn respect.

Now, let’s take this to another level:

I’m a grown woman, with a reasonably secure knowledge of my own value and worth.  And not that it’s necessary, but I have a loving husband who affirms that daily, as well.

But what about the teenage girls who receive messages like this?  I have a 17-year-old sister and I remember that age quite clearly still, myself.  It was easy at that age to allow your self-worth to be dictated, or at the very least affected, by the (normally less-mature) opposite gender.  So how would being the subject of one of these messages affect her?  Would I stand by and make excuses for him if it was her?  Hell no.  I’d be hard-put not to beat someone’s ass.  Would I tell her to just ignore him?  I don’t think so.

Girls, young ladies, listen to me:

Your sexuality and femininity are AMAZING.  And you should embrace them and feel empowered by them.

BUT you are also smart,

and you are STRONG.

You are a sum of all your parts.  Not some object to be sexualized and reduced to a singular aspect of your being.

And now the icing on the cake:

This jerkface brought my technical skills into this.  “Offering” to have sex with me in exchange for my design skills.  (Guess what buddy, I bet you’re not quite the catch you think you are.)

You know what?  It’s no wonder that only 12% of recent Computer Science grads have been women.  And that’s DOWN over the last 20 years or so.  Who the heck wants to go into an industry that’s dominated by men and where this sort of sexual harassment is actually pretty commonplace?

I worked HARD for the skills and knowledge I have.  Just as hard as the men in this field.  And I’ll be damned if I’m going to let some ignorant asshole take that pride away from me.  Girls, don’t let something like this deter you from going into ANY field you want!  Don’t let fear of gender harassment deter you.  If it happens, call them out on it.